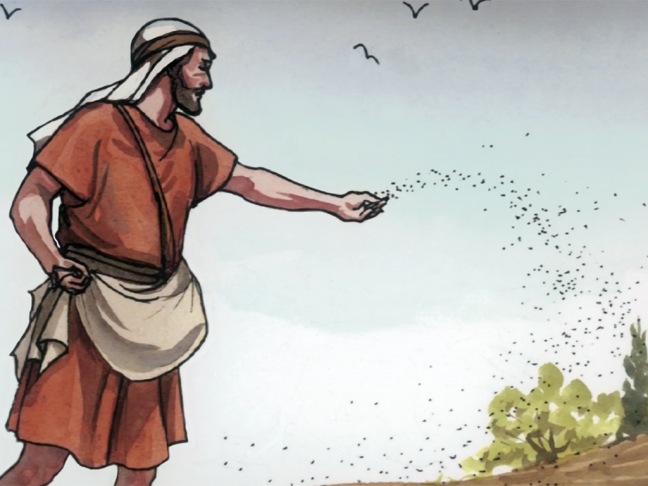 1“For the kingdom of heaven is like a landowner who went out early in the morning to hire workers for his vineyard. 2 He agreed to pay them a denarius for the day and sent them into his vineyard.  3 “About nine in the morning he went out and saw others standing in the marketplace doing nothing. 4 He told them, ‘You also go and work in my vineyard, and I will pay you whatever is right.’ 5 So they went.  “He went out again about noon and about three in the afternoon and did the same thing. 6 About five in the afternoon he went out and found still others standing around. He asked them, ‘Why have you been standing here all day long doing nothing?’ 7 “‘Because no one has hired us,’ they answered. “He said to them, ‘You also go and work in my vineyard.’ 8 “When evening came, the owner of the vineyard said to his foreman, ‘Call the workers and pay them their wages, beginning with the last ones hired and going on to the first.’  9 “The workers who were hired about five in the afternoon came and each received a denarius. 10 So when those came who were hired first, they expected to receive more. But each one of them also received a denarius. 11 When they received it, they began to grumble against the landowner. 12 ‘These who were hired last worked only one hour,’ they said, ‘and you have made them equal to us who have borne the burden of the work and the heat of the day.’  13 “But he answered one of them, ‘I am not being unfair to you, friend.  Didn’t you agree to work for a denarius? 14 Take your pay and go. I want to give the one who was hired last the same as I gave you. 15 Don’t I have the right to do what I want with my own money? Or are you envious because I am generous?’

The Story of a Worker

Consider this situation with me.  There was a man that was working at a certain job for many years.  The man was faithful with the work that he was given and never once did he complain, for his boss paid him generously.

Then one day, the boss brought in a new person to work with the man.  The man was thankful for the extra help and was eager to help this new employee in the work.  However, the new worker did things differently and it rubbed the man the wrong way.  Even so, the new employee did his work well and so the man tolerated him.

Then the day came for the man to receive his wage.  The new employee went in first and when he got his pay, he was grateful for the boss’s generosity.  When the man came to get his money, he thought that he was going to get more, after all, he did have seniority.  However, when he got his pay, it was the same as before.  The man was furious.

Getting What You Deserve

What reason did the man in this story have to be angry?  It was the same reason that the workers in Jesus’s parable had.  They both believed that they deserved more honor than those who came before since they worked longer and harder.

For those who serve in God’s kingdom diligently,  it’s easy to fall into the trap of believing that they are better than other faith followers.  They feel, because of the time they’ve invested in God’s work, that they are entitled to have more of the reward which God bestows on His children.  They often feel frustrated when they see other believers doing nothing while they are working non-stop to serve God.  These workers for Christ even believe that if they took a break, everything in the Kingdom of God would cease.

Believing that the whole world would collapse if you aren’t there is an act of pride and doesn’t honor God in the least.  The truth is the Lord doesn’t need you or me at all to accomplish His work on earth.  Nevertheless, He allows us to work, not for Him, but with Him, in sharing His goodness on the earth.  Instead of being prideful over the work that we do, we should display gratefulness to God for giving us the honor to serve with Him.  We have no right to demand more from God, for He has given us more than we deserve.

Focus on the Calling

With that in mind, we shouldn’t worry about what other faith followers are doing.  They may not be working right now, but the time will come when the Almighty will call them into the harvest field to work in His Kingdom.  We should be content with the work we are called to do and devote all our energy  to it.  The day is coming when the Lord will reward all His children according to His grace and His mercy.