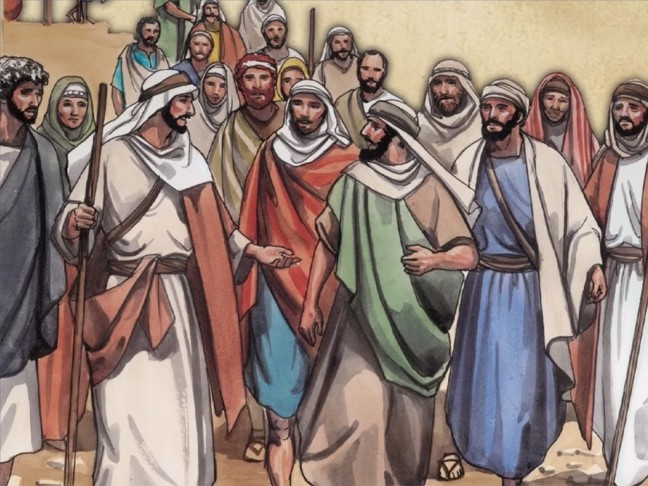 1 “At that time the kingdom of heaven will be like ten virgins who took their lamps and went out to meet the bridegroom. 2 Five of them were foolish and five were wise. 3 The foolish ones took their lamps but did not take any oil with them. 4 The wise ones, however, took oil in jars along with their lamps. 5 The bridegroom was a long time in coming, and they all became drowsy and fell asleep. 6 “At midnight the cry rang out: ‘Here’s the bridegroom! Come out to meet him!’ 7 “Then all the virgins woke up and trimmed their lamps. 8 The foolish ones said to the wise, ‘Give us some of your oil; our lamps are going out.’ 9 “‘No,’ they replied, ‘there may not be enough for both us and you. Instead, go to those who sell oil and buy some for yourselves.’ 10 “But while they were on their way to buy the oil, the bridegroom arrived. The virgins who were ready went in with him to the wedding banquet. And the door was shut. 11 “Later the others also came. ‘Lord, Lord,’ they said, ‘open the door for us!’ 12 “But he replied, ‘Truly I tell you, I don’t know you.’

Consider this story,  a boy got the news from his Mom that as soon as his Dad came home, they were all going to his favorite amusement park.  However, if the boy’s room wasn’t cleaned by the time the Dad came home, the trip was cancelled.

The boy went to work on cleaning his room.  After an hour, the boy got a quarter of his room clean (it was a very messy room).  His Mom came into his room and told him that his Dad was running late, but encouraged him to keep cleaning.

An hour turned into two and the boy’s  Dad was still not home.  He was halfway done with his room cleanup.  However, he was beginning to doubt whether his Dad would come on time, for the amusement park will closed in five hours.

Three hours had passed, and Dad wasn’t home.  The boy thought to himself, ‘By the time Dad shows up, it’ll be too late.  Why bother cleaning up my room?’  Feeling dejected, the boy decided to take a nap.

Fifteen minutes later, the boy heard the door open.  He rushed to see who it was and sure enough, his Dad was home.  ‘At last,’ the boy thought, ‘We can go!’  But the boy’s Father asked him if he cleaned his room.  The boy lowered his head, “You were late and I thought that we wouldn’t get there on time, so I stopped cleaning my room.”  The Father shook his head and told his son that instead of going to the park, the boy will be spending the rest of the day cleaning his room.

None of us like to wait, especially if the thing we are waiting for is something that we want really badly.  For every follower of Christ, the thing that we desire to see happen is the return of our Lord and Savior.  Most believers, in anticipation of His coming, have worked hard to honor the Lord in all that they do, using the gifts and resources that the Almighty gave to them.  They want to hear from Jesus, when He returns, the word, “Well done, good and faithful servant.”

However, there are some believers who have begun to doubt Jesus’s return.  Since Christ’s ascension to the modern times, believers have hoped that He would return during their lifetime, and still, there’s no sign of His coming arrival.  As a result, some believers think that He’s not coming at all.  With this mindset, these Christians end up using the gifts and resources that God has given to them for their own benefit; living for themselves rather than for the Almighty.

Such faith followers are making a critical mistake.  For the Bible clearly states that the Lord Jesus is coming very soon.  He may come today, tomorrow, next week, next month, next year, next decade, next century, or next millennium.  Regardless of when, the fact is He is coming, and we must be watching for His return.

Therefore, let’s prepare ourselves for His coming.  Let’s live our lives for God rather than for ourselves.  Let’s not be the foolish virgins in Jesus’s parable, who waited to the last minute to get ready for the Bridegroom’s coming and they were left behind and not allowed into the wedding feast.