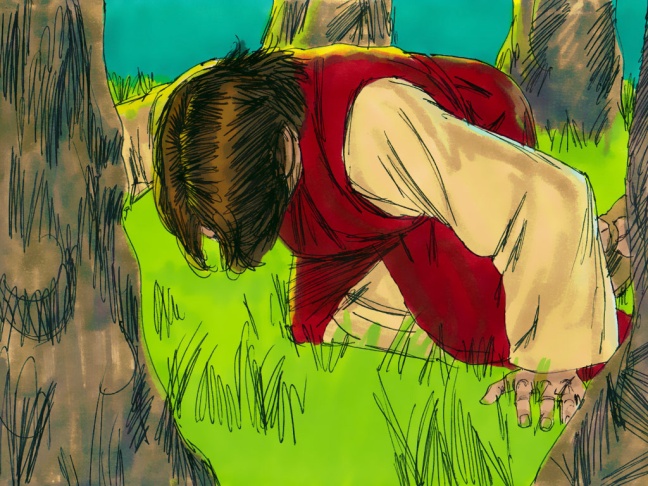 37 He took Peter and the two sons of Zebedee along with him, and he began to be sorrowful and troubled. 38 Then he said to them, “My soul is overwhelmed with sorrow to the point of death. Stay here and keep watch with me.”  39 Going a little farther, he fell with his face to the ground and prayed, “My Father, if it is possible, may this cup be taken from me. Yet not as I will, but as you will.”  40 Then he returned to his disciples and found them sleeping. “Couldn’t you men keep watch with me for one hour?” he asked Peter. 41 “Watch and pray so that you will not fall into temptation. The spirit is willing, but the flesh is weak.”  42 He went away a second time and prayed, “My Father, if it is not possible for this cup to be taken away unless I drink it, may your will be done.”

Each of us, at one time or another, have faced a test of our faith.  Each test varies in intensity.  Some are small like dealing with people that are difficult.  While others are challenging like when a loved one, or yourself, have contracted a devastating illness and no one seems to know what to do about it.

Why We Face Trials

Regardless of what it is, our natural instinct is to run away from these trials that the Almighty has placed before us.  However to do so would mean we failed the test of faith which He has given to us.  Why does the Lord place such hardships before us; is it because He doesn’t like us or we made Him angry?  Of course not!

Example of the Trainer

He gives us trials because He loves us.  Think of it this way, suppose you want to get back in shape and you hired a personal trainer.  The workout regimen he has placed you on is excruciating, and no matter how much you complain, he keeps pushing you through it.  The trainer doesn’t push you because he hates you.  Instead, he pushes you because he wants you to succeed in accomplishing your fitness goal.

Faith is Strengthened in Trial

The same principle applies to when God tests you.  He knows that your faith in Him needs to be strengthened so that you could grow more and more like Christ.  The only way for this strengthening to occur is to place it in a situation that’s difficult to handle and requires you to turn to the Lord for help.

With this in mind, how can we endure the tests He gives us?  Let’s consider what Jesus did when He faced the ultimate trial in Matthew 26.  In the night before His crucifixion, He needed strength to face His pending death.  Even though He was God, He was also a man and I can imagine that He wasn’t looking forward to the pain that He had to endure.  To strengthen His faith, He went to the Lord in prayer; but that wasn’t all that He did.  He encouraged His disciples to pray also for Him.

Never underestimate the power of prayer when you are in the middle of a crisis.  It’s like calling in a Divine Airstrike or Airlift when you are pinned down in a hopeless situation.  The Bible has shown many times how when people pray, God does wonders.  Examples like Abraham praying for a son, Elijah praying for rain, and King Hezekiah praying for national deliverance, show us how one person’s prayer can reveal God’s glorious power.

Since this is true, think about what would happen if a group of people prayed for you when you faced a trial.  It would be like the power of one’s faith magnified.  An example of this is found in the Scriptures.  When the Apostle Peter was put in prison, the whole body of believers prayed for him, and sure enough, the Lord miraculously delivered him from his crisis.

So the next time you face a difficult situation, seek the Lord in prayer about it.  Invite your friends and family to pray with you too.  Now I’m not suggesting that God will answer your prayer the way you want it.  However, He’ll handle it in a way that’s according to His will, and His is far better than what we could ever imagine.  Therefore, be open-minded to how He’ll answer your prayers.  Stay strong in your faith and never lose heart; seek the Lord and He’ll give you the strength you need to overcome all things.

One thought on “What to do in Trials”