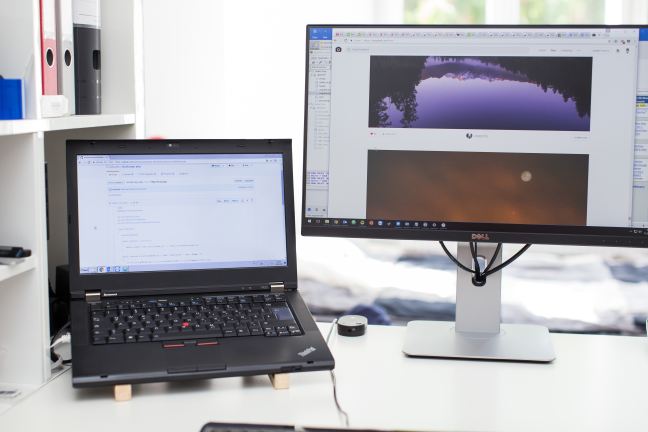 After sharing his dream, Daniel explained how he turned his life around and embraced Jesus as his Lord and Savior.  Using his knowledge in science, Daniel decided to build something that would serve as means of witnessing Christ to others.  He leads the others into his workshop to show them what it was he had built.

With a CLICK, all the ceiling lights in the workshop slowly turned on.  On the left wall were drawers that were filled with all kinds of tools.  Above them was a glass cabinet that was filled with devices that looked a lot like the ones Zach and John saw in the office next door.

“Go ahead,” said Daniel, “And please call me Daniel.”

“Okay…Daniel.  In your office, I noticed in your glass case a bunch of very expensive scientific equipment.”

“In here, I have also noticed that you have more devices which are more expensive than the ones in the other room.”

“What Zach is trying to say,” interrupted John, “All these gizmos cost a lot of money.  How did you get them?  Did you steal them or something?”

Daniel shook his head and smiled.  “When I was at the University, I made friends with some of the faculty and staff.  After I graduated I kept in touch with some of them and I told them I was doing research and that I needed certain equipment.  Believe it or not, they agreed to help and donated the gear to me.  All of it was used and out of date anyway and they already had new stuff.”

“They just… gave it to you?” asked Zach.

On the right wall there was a top mount refrigerator with an electric stove next to it.  Above the stove was a microwave.  In front of the fridge was a black card table with four foldable metal chairs around it.  Beside the stove was a stacked washer and dryer with an empty red basket on top of it.  In front of the washer and dryer was a full size bed with all its covers tucked in.

“You live here too?” asked Liz.

“Yes I do,” said Daniel, “My parents live an hour away and it’s too expensive to rent an apartment while I’m attending Seminary.”

“It must be really uncomfortable,” said Mary looking at the sparse accommodations.

“Hmm… not really,” said Daniel, “I don’t pay any rent and it keeps me close to the church.  Besides, if someone came to the church for help, I would be here to give them a helping hand.”

“What’s that over there,” said Simon pointing to the wall at the end of the garage.  At the end of the workshop was a large structure that was covered with a canvas cloth, the kind used to cover expensive cars.  It was so large that it nearly took up the entire wall space.  On each side of the structure were two black boxes that were about the size of two portable refrigerators standing side by side.  Flashing lights blinked at the top of each box and as the group got closer, the devices emitted a steady hum.

“Ah… my friends,” Daniel said to everyone, “This is the thing that I wanted you to see.”

Daniel grabbed the canvas and pulled it off.  The device was octagon-shaped and was balanced on a silver colored tip at its base.  Each side of the octagonal device was paneled with a metallic wall that connected to the cone-shaped roof which touched the ceiling of the workshop.  There were no distinctive marks on the device except for two sliding doors facing in front of them.  On each side of the door was a pair of halogen lights.

“It looks like a giant silver top,” said John.

“You got it to work?” asked Carrie anxiously.

“But what is it?” asked Simon.

Daniel went to the machine and patted one its panels. “This… my friends… is a time machine.”

2 thoughts on “In the Workshop”

When we allow the Gospel message to dwell in our hearts, it will fill us with all joy as we pursue the works of God. Therefore, as we do our ministries, let us do it with all our heart for Christ watches everything that we do and gives us what we need to complete them. Let us thank the Lord for this. #Bible #christian #God #Jesus #service #love #thanksgiving #colossians31617 @call2witness
When we plan to do anything that we feel is honest and true, we need to seek counsel of the Lord before proceeding. For God alone knows the true motives of our hearts, and if deep down our reasons for pursuing these works is to glory ourselves rather than God, then He will convict us of this and we will refrain from going forth. #bibleverse #bible #christian #proverbs #God #service @call2witness
#christian #Bible #bibleverse #Prayer #fellowship #friendship #love #God @call2witness
Follow Call 2 Witness on WordPress.com