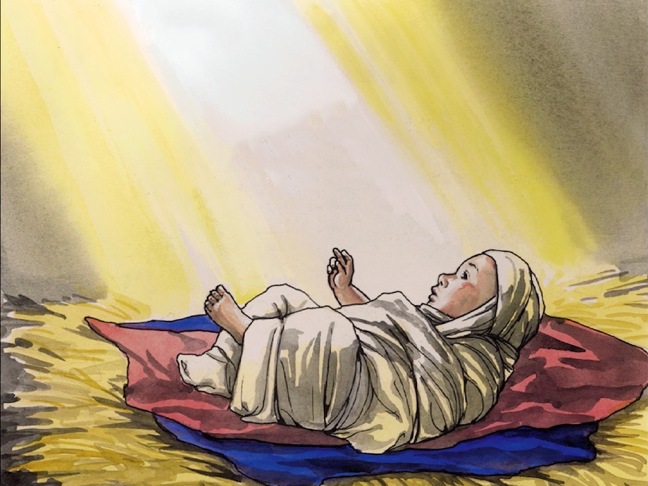 The Bible Jumpers follow the shepherds to the town of Bethlehem.  Seeing the town gate is closed, Daniel leads the group along the town’s wall to a dirt path which them to a stable.  Upon arriving at the stable, they are greeted by the shepherds.

The Bible Jumpers turned and saw the shepherd Reuben coming towards them.

“My friends, I am so glad that you came,” he said as he grabbed Daniel’s shoulders.  He pointed to the cave.  “It is as the angel has said.  Come and see.”

The old shepherd led them to the mouth of the cave.  The other shepherds stepped aside to allow them to come in.  The entire dirt floor of the cave was covered with yellow straw.  Two little white lambs looked at them as if to welcome them. Then they trotted towards the manger which was in the center of the cave and sat down beside it.  To the left, a cow mooed lazily, announcing the new visitors to the one they came to see.  On the right side of the cave, a pair of sheep laid side by side, their eyes fixed upon the one in the manger like two guards keeping watch.  The hay that was in the small feeding trough served as a soft bed for the cloth swaddled child that slept peacefully in it.

“He is so beautiful,” whispered Liz.

“Thank you, friend,” said the young girl who was sitting beside Jesus’ bed.

“Carrie, is that Mary, the mother of Jesus?” whispered Mary.

“I think it is,” whispered Carrie.

“She looks like she is about my age… Maybe even younger.”

“Hey Zach,” said John pointing to the shepherd that was kneeling at the manger.  “Isn’t that Amos?”

The two boys came closer and sat beside the young shepherd.  John looked at Amos’s face.  “Are you okay Amos?”

Amos wiped his face.  “Yes… yes I’m fine.  I’m just… happy…happy that the Messiah is here.”  He pointed at the manger.

John looked at the child in the straw bed.  “He is a good looking kid isn’t he Zach.”  Zach didn’t answer.  “Zach what’s wrong?”

“That man beside Mary,” whispered Zach.

“Look at his face and then look at Jesus’s face.”

John looked.  “Well, I do notice that Joseph is a lot older than Jesus.”

“It’s not that,” whispered Zach sharply, “They look nothing alike.”

“I don’t think Joseph is the father.”

Simon and Carrie walked past Zach and John.  “Is it alright?” Carrie asked Joseph.

“It’s okay,” he said as he placed his hand on his wife’s shoulder and smiled.

The two Bible Jumpers knelt beside the sleeping infant.

Simon looked deeply into Jesus’s face.  ‘Is this real?  Are you really Jesus?’

The baby opened his eyes, looked at Simon, and smiled.

“I think He likes you Simon,” said Carrie.

Simon froze.  “Did you say something?” he whispered to Carrie.

Simon looked at Jesus.  The infant was still smiling. Then He yawned and went back to sleep.

“I’m so glad that I came too,” whispered Simon to Jesus.

Simon felt a hand on his shoulder.  He turned around and saw Daniel.  “It’s time for us to leave,” he whispered.  Simon looked behind him and saw Liz, Mary, John, and Zach already heading to the mouth of the cave.

“Do we have to leave?” asked Carrie.

Daniel nodded his head.  Carrie shrugged and slowly got up and joined the others.  Simon did not move.  “Simon, He needs His rest.”