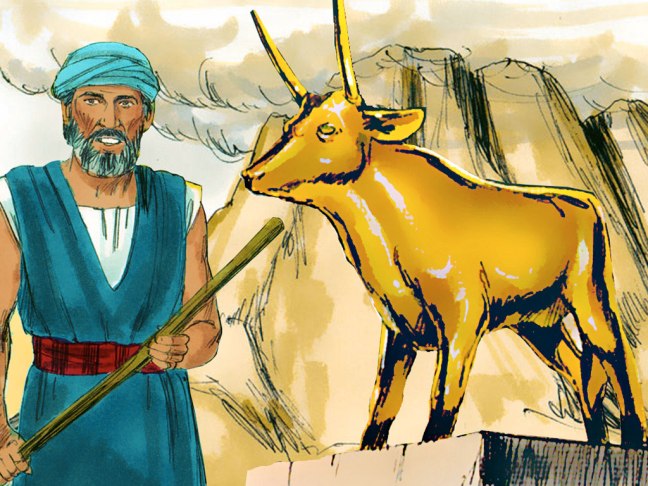 9 “I have seen these people,” the Lord said to Moses, “and they are a stiff-necked people. 10 Now leave me alone so that my anger may burn against them and that I may destroy them. Then I will make you into a great nation.”

11 But Moses sought the favor of the Lord his God. “Lord,” he said, “why should your anger burn against your people, whom you brought out of Egypt with great power and a mighty hand? 12 Why should the Egyptians say, ‘It was with evil intent that he brought them out, to kill them in the mountains and to wipe them off the face of the earth’? Turn from your fierce anger; relent and do not bring disaster on your people.

14 Then the Lord relented and did not bring on his people the disaster he had threatened.

19 When Moses approached the camp and saw the calf and the dancing,his anger burned and he threw the tablets out of his hands, breaking them to pieces at the foot of the mountain. 20 And he took the calf the people had made and burned it in the fire; then he ground it to powder,scattered it on the water and made the Israelites drink it.

An Act of Defiance

As Moses was being given the Law which Israel was to follow, down at the base of the mountain, the people grew bored.  They commanded Moses’s brother Aaron ( the future high priest to the Lord) to build gods for them to worship.  Instead of resisting their sinful request, Aaron instructed the people to gather all the gold that they had so that he could make a god of gold for them.  The Israelites did as Aaron commanded and he took the gold and formed it into a calf.

When the golden calf was presented to Israel, Aaron declared it to be the god who freed them from the bondage of Egypt and announced a feast day to the idol.  The people rejoiced over the calf and began presenting sacrifices and bowing down to it.  It is crazy to consider the Israelites doing such a thing and violate God’s command of having idols.  Especially since a few chapters ago, God made Himself known to them and they themselves pledged to obey all His commands.

The Lord, no doubt was angry with His people.  After all that He has done for them, they still seek to do things their way and not His.  Of course, this wasn’t first time that Israel disrespected the Lord.  Even when they were rescued from the hands of the Egyptians, the people complained against God for not having food to eat and water to drink.  The golden calf was the last straw for God, for it was clear to Him that Israel was a nation of stiff-necked people, a nation who refused to trust and submit to His authority.  He was so angry in fact, He even considered wiping out the nation and starting all over with Moses and his family.

The Consequences of Sin

Sin is something that the Lord does not take lightly, for it is an act of defiance against His authority.  Those who sin against God and oppose His sovereignty will face the fullness of His wrath; and His anger is like a burning and consuming fire that will never be quenched.  Furthermore, along with His burning wrath comes the ultimate consequence of sin, which is the total separation from God’s presence forever.  Such a punishment is terrifying to consider, for to be separated from God is to be separated from all things and to be left alone in a void of nothingness!

Despite His righteous anger towards sin, the Lord does not wish to see His creation face such a horrific punishment.  Praise the Lord, for out of His loving compassion, He provides an intercessor to speak grace for His people.  Israel was in the Lord’s cross hairs, but He stirred the heart of Moses to asked for grace on behalf of the people.  He asked for this, not because Israel deserved it, but because to deny grace would go against God’s nature, for He is one who keeps His promises to those who put their faith in Him.  As a result of Moses’s petition, the Lord relented.

Like Israel, we Christians also have an advocate who speaks on our behalf, the Lord Jesus.  For like Israel, we have been a stiff-necked people, refusing to submit to the authority of the Almighty; and as a result, the Lord’s burning wrath was upon us.  Jesus however stands before our Heavenly Father daily asking for grace.  Jesus does this not because we deserve it, but because of what He did on our behalf: taking upon Himself the burning wrath that was our due for our sins.  With this in mind, let us live our lives in a way that glorifies Christ, and do this out of gratitude for the sacrifice which He gave on our behalf which placed us in God’s grace.